A high-resolution Digital Elevation Model (DEM) of the Wellington Region has recently been made available for download from the LINZ Data Service. The DEM has a 1m cell-size. This provides an unprecedented degree of terrain detail across the entire Region. We are grateful to Bjorn Johns and the Location Information Group at LINZ for their work on this release.

The DEM was created from an airborne LIDAR survey in 2013-2014 commissioned by the Wellington Regional Government GIS group (WAGGIS) with support from LINZ. The data was processed by James Shepherd at Landcare Research for the WAGGIS group.

Below is an example image from the DEM with hillshading showing the water reservoirs at Kaitoke and Kaitoke Hill on SH2.

The data was reprocessed in 2016 on behalf on LINZ to match the new national vertical datum standard (NZVD2016) with improved water classification and hydro-flattening. Specification documents and further links can be found on the LINZ website 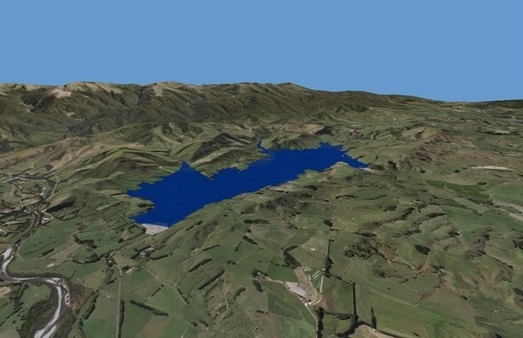 The release of the dataset for download is the culmination of a long process which began in 2012. The project launched in 2012 when GWRC was due to perform local LIDAR surveys for Flood Protection and Land Management purposes. It was realised that survey work could be combined, and with some extra capture costs, the whole Wellington Region could be surveyed. The airborne LIDAR survey was performed in 2013-2014 by Aerial Surveys Ltd (ASL) of Auckland, covering over 8,000 Km2. We are grateful to ASL for their dedication to a challenging task covering difficult terrain.

The cost of conventional semi-manual data postprocessing would have been prohibitive. To avoid this, Landcare Research used innovative techniques to perform automated postprocessing of the data using SPDLib software.

The outcome was a set of DEM (digital elevation model) and related grid datasets of regional terrain. This was one of the first projects in NZ to achieve broadscale LIDAR coverage at this type of scale. The high resolution data can easily discriminate small features such as small tracks, individual trees, and farm ponds.

The terrain models provide very good quality mapping of bare earth, urban, and exotic forest areas. Users of the data should be aware that in some areas, dense native forest canopy or gorse can cause some roughness in surface models. This is partially due to the use of an earlier-generation model of LIDAR sensor. The survey contractor has subsequently acquired a later-generation LIDAR scanner with much-improved capabilities. In addition, the automated postprocessing techniques used cannot always match the results of conventional labour-intensive finishing. In places, building outlines have been left in the DEM, where the postprocessing has been unable to distinguish them. The pioneering nature of the project has lead to many valuable lessons to guide future work.